Most of you at this point have heard about Amazon Worlds. At least, you have if you connect with any kind of social writing media. For those of you who wisely avoid this cess-pit, let me inform you as to what is happening. Amazon has optioned rights for a bunch of worlds/character sets and is about to open the floodgates on those worlds to fan fiction authors to sell their work on Amazon.

My initial reaction was, “Oh HELL no.” This stems from a sense of ownership over my characters and worlds. If anyone is making money off of it, I should be. But then we look at bit closer at what Amazon is doing. They will only publish fan fiction that is optioned by them, so nothing that the authors/writers/producers haven’t already given the go ahead for (and been paid for). And on top of that, the original content creators will get a cut of anything that’s published.

Well then, that’s alright, isn’t it? You get paid for something you didn’t have to write and your characters and world get more air time which equates to more exposure and better sales of your original work. Or it should, at least in theory.

But here’s where I get hung up and I’m not sure I could ever bring myself to license saleable fan fiction until after my death or the onset of dementia…you have no control over what these people are making your characters do.

Have you READ some of the fan fiction out there? It’d make the sado-masochistic lead of 50 Shades blush. I mean…the things they make Harry and Malfoy do…and then they add in the basilisk…Emma’s face says it all:

So, I’m left with this uneasy feeling that this is going to get away from Amazon, particularly since they just tightened their restriction on adult content in their bookstore. Half the fan fiction they are about to receive will be so absurdly smutty, bizarre, gross, and just unsaleable that I hope they’ve hired the sexual crimes division of the local prisons to scan them because those are the only humans who are going to be able to stomach it. 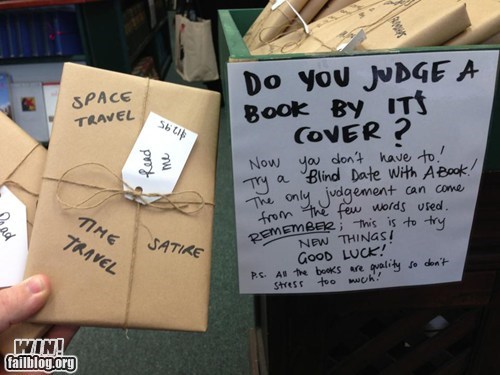 This wonderful image came across my screen a while back and I thought it would be fun to try a guessing game! I’m going to list a few of my favorite books below by the keywords that come into my head, and you all can try and guess them! Alternatively, list a new book in the comments and let others try and guess! To make it a bit harder, you only get three keywords, or terms, if you will…

And I promise, I’ll get back to the reviews shortly. I’ve been stomping my way through the Kingkiller trilogy while simultaneously trying to juggle roommates.